An outdoor rover, capable of autonomous navigation (using GPS and sonar sensors) or controlled over WiFi.

An outdoor rover, capable of autonomous navigation (using GPS and sonar sensors) or controlled over WiFi. 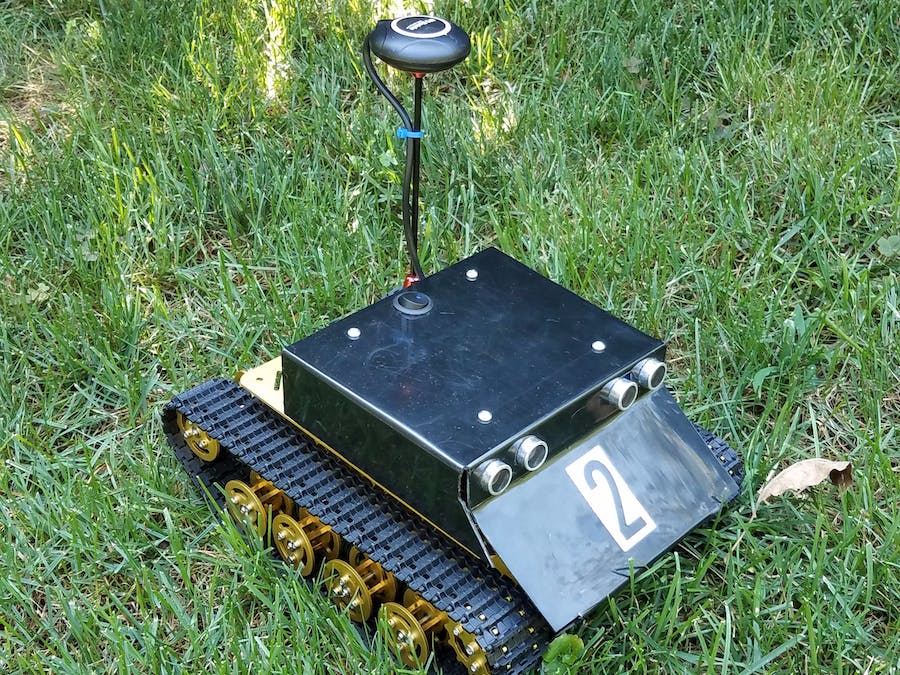 The goal of this project is to create an outdoor rover, capable of autonomous navigation using GPS and sonar sensors, but which can also be controlled and tracked over WiFi. Of course, there are dozens of similar projects (some under the name "smart car"). Here are some features which set this project apart:

This tutorial contain full instructions; in the attachments you will find Bill of Materials (in CAD and custom parts section), schematics, and sample code.

This projects was created for robotics lab at SigmaCamp, a science summer camp.

For chassis, we use TS100 tank chassis by Chinese company DoIT (http://en.doit.am/ ). The chassis can be bought from their AliExpress shop; there are several versions - choose the one with 12V motors. As of time of this writing, total cost (including shipping to USA) is $89, and shipping was fast.

The chassis is very well made, with miniature ball bearings for axles. The chassis can be assembled in several configurations; we used more narrow one, and put both motors in front (see images above). The only change we made was replacing regular M4 nuts by locknuts and drilling extra holes for mounting the electronics. We also soldered 18 gauge cables to motors.

Finally, after attaching all electronics and sensors, we cover the rover with a shell made from 1/16" ABS plastic; we use heat gun to bend it to shape. It is mounted using four 2-inch aluminum standoffs. The power switch and sonar sensors, described below, are mounted on the shell.

We used 3000 mAh 12V NiMh battery (such as this one from ServoCity) - just because we had a bunch of them from FTC competitions. They are not cheap - feel free to use any 9-15 V battery source of your choice. We attached the battery under the rover, using zipties; low center of gravity helps stabilize the robot.

We also used an illuminated 12V rocker switch - any generic one will do (choose round to make it easier to install). The wiring uses 18 gauge cable (speaker wire is probably the easiest choice).

All motor and power wires going into the screw terminal of the control board were terminated with wire sleeves (ferrules). Another option is tinning the wire ends, but it is less reliable and not recommended (see, e.g., discussion here).

This is the core of the car. It consists of a custom-designed PCB (eagle files are attached), on which we mount the following components:

We had the PCB manufactured by SeeedStudio Fusion service; total cost for manufacturing and shipping 10 boards was about $20 (with two-week delivery to US; for extra $20, you can get expedited shipping and receive your boards within 3 days). Here is the direct link to the board design in SeeedStudio gallery for easy ordering. Alternatively, you can use eagle files attached to the project, modify them as you like, and order your own copy from any PCB manufacturer.

The board has 4 mounting holes (for M3 screws) using the same pattern as Raspberry Pi board: 49 mm x 58 mm rectangle.

To make it easy to upload new code to NodeMCU, we use a USB extension cable (microUSB male to microUSB female). One end is permanently plugged into the NodeMCU, the other is ziptied at the rear of the rover for easy access. This also reduces the wear on NodeMCU microUSB port.

We use two HC-SR04 sonar sensors for obstacle detection. To free the resources of the NodeMCU microprocessor, we use a separate MCU, ATtiny85, for controlling the sonars. NodeMCU and ATtiny85 communicate using I2C protocol. This also takes care of differing logic voltage levels (5V for HC-SR04 and ATtiny85, 3.3 V for NodeMCU): ATtiny85 and NodeMCU easily communicate over I2C bus, with pull-up voltage of 3.3V.

We use DualSonar library for programming the ATtiny85; please see the README file for installation instructions (you will need an Arduino Uno to serve as a programmer for ATtiny85).

We use a GPS+compass combination sensor; such sensors are commonly used for drones/quadcopters. These sensors combine two chips: a GPS chip (usually made by u-blox) and magnetometer (compass) chip, usually Honeywell HMC5883 magnetometer. They are available from a number of vendors (usually Chinese no-name vendors). We had bought our sensor on eBay, but you can choose any vendor; you can find one under $20 (including mount). We recommend using a sensor based on newer u-blox NEO-M8N chip, which provides increased accuracy compared to older NEO-6 and NEO-7 series chips, by using concurrently GPS (US) and GLONASS (Russia) navigation systems (it is also capable of tracking Chinese BeiDou and recently launched European Galileo satellites). However, it also requires extra work when programming (see Software installation section below).

List of pin assignments and connections, needed for programming, is given in attached spreadsheet.

Note that in this spreadsheet, serial interface for GPS sensor is labeled from the point of view of the sensor: "TX" means "pin which connects to sensor's TX".

Note also that if you duplicate this project and are looking to change pin assignments, it is trickier than you might expect. For example, during normal startup of NodeMCU, GPIO 15 must be held low, which means that you can not use it for I2C (which is normally held high).

We program the rover using Arduino IDE. To do that, one needs to install the following extra components:

We had some thorny issues using these libraries:

Finally, you need to install Blynk app (available for Android and iPhone) on your cell phone, and you need to have a WiFi network - usual household router would do for indoor tests. For using the rover outdoors, see section on Blynk local server below.

Attached to this tutorial is a zip file with sample sketches:

For using rover outdoors, far from any infrastructure, we made our own portable Blynk server, consisting of