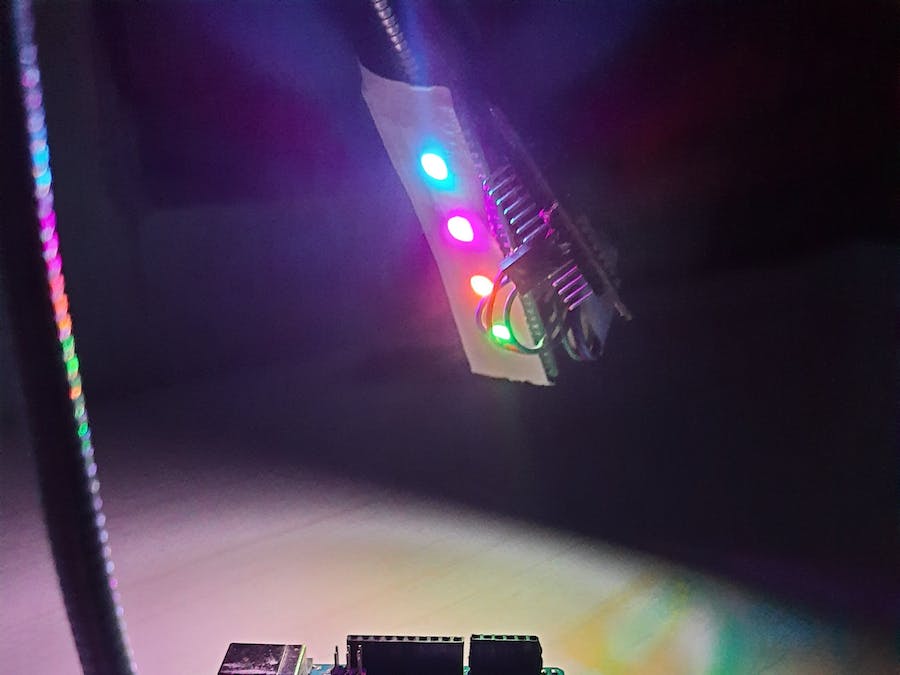 Since this pandemic I have been looking for projects for which I have all the components ready because the international shipping were closed here in India.

I was thinking of making some projects with the Neopixels I have and luckily I was having the ESP8266 based Nodemcu which motivated me to move towards the IOT operation using the Blynk Platform.

HOW I THOUGHT OF THE PROJECT....

There were some thoughts of making a Halloween Fun light or a Christmas Special lighting, But unfortunately I blowed off the neopixel Led required during Soldering which forced me to drop the project and The day after I was looking at my Nodemcu kept on my table suddenly an idea clicked me of decorating my Table for the upcoming year 2021.

HOW I BUILD THE PROJECT....

I collected the 4Bit Neopixel Led strip, some wires and of course the Nodemcu. I opened the Arduino Ide and started to explore the WS2812Bfx library. I ran few examples and got an idea of using the Blynk IOT Platform for which I have to read the Widget code in the documentation section. I explored the web and collected the useful information noted in my notepad.

Finally when the project was completed I realized the LED strip and The Neopixel Strip getting hot when operated for half an hour. Thus I got myself one of the most popular Zero PCB (as a heat sink) from my friend and instead of soldering the leds to the PCB I stuck the Strip itself to the PCB followed by some small holes on the strip to ensure that the dissipation of heat takes easily and worthfully.

Here you can see some of the animations that I had with my NeoPixel and Blynk.

CONSTRUCTION OF THE PROJECT....

Talking about the Construction of the project, I divided the project in two parts

Part A - I ensured the proper working of LEDs and the Coordination with the Blynk platform. I found some issues with wrong color output i.e. when I selected the Green colour, I see the Blue color glowing which bought me to a point that there has to be the sequence of GRB in the widget 🤦‍♂️. I then corrected the Code with some additional error in the void setup. After a lot of brain hammering finally there was a good output than before. so the PART-A ends here and now it was time to make the final structure of the Neopixel Lamp to add effects on my snaps & shots with electronics.

PART B - While thinking for the Stand I found a flexible stainless Steel Stand with my friend. Luckily the stand was a waste for hem but a good source to me at no worries of shipment and cost. After getting the stand I was in a doubt whether I can solder the stand to the PCB Pads for good rigidity or can I use a screw to have it positioned. Finally with lots of wasting the solder on the stand, I could fix it then I though of hot gluing it using the hot glue gun but then the problem was of fixing the nodemcu so that the leds can be rotated 360 degrees and all direction so I glued the Nodemcu on the Back PCB Itself keeping some aeration space between both the PCBs. Hence now it was time to have a good tough base for the LEDs, so I used the Mount Board with a thickness of 1cm so that the stand can pass and fix easily. Hence gluing the stand from bottom. The project was complete and is working like a charm.

GETTING THE PROJECT PROFESSIONALLY CONSTRUCTED???

If you would love to get the project in more professional build for your decorations then comment below and I will share the relevant files for your use.

Also get your PCBs manufactured Professionally by @lioncircuits. They provide incredible price range of just $15 for 10Boards and 99% on time shipments worldwide. They provide IPC Class 2 PCB with modern technologies. Check their profile on Instagram .

It really feels motivated when I read the comments below on the project.

My Instagram Page @ps_electrobot has some cool snaps of the effects of the Lamp, make sure you view them too and give your support with some likes and comments...

2 projects • 1 follower
A maker from india . Electronics as a hobby. I make projects on leds , Arduino and IOT . Lets make electronics the unexplored fun.
ContactContact