Many IoT based Home Automation projects crashes when the Internet speed goes down. So, within this project, I tried to solve this issue.

IoT based Home Automation with & without Internet

IoT based Home Automation with & without Internet

Many IoT based Home Automation projects crashes when the Internet speed goes down. So, within this project, I tried to solve this issue. 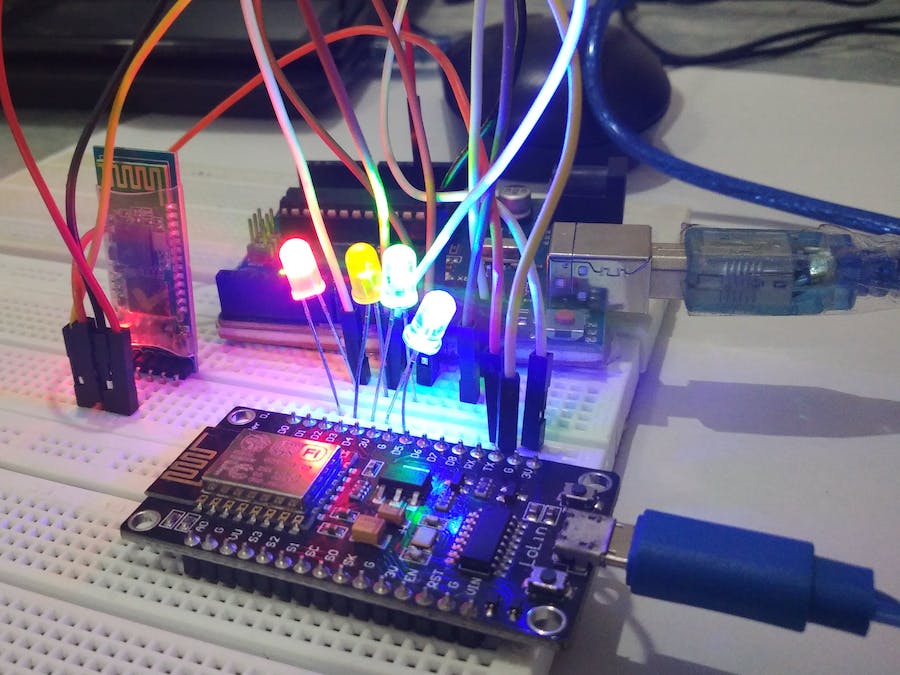 You can add a relay module to control actual electrical appliances like water pumps, geysers, LED bulbs, Fans, etc. For providing a 5V supply to a project I have connected Arduino Uno’s +5V & GND pin to the Vin & GND pin of NodeMCU board, instead of IC 7805 & Battery.

NodeMCU is a low-cost open-source IoT platform. It initially included firmware that runs on the ESP8266 Wi-Fi SoC from Espressif Systems and hardware that was based on the ESP-12 module. Later, support for the ESP32 32-bit MCU was added. NodeMCU is an open-source firmware for which open-source prototyping board designs are available. The name "NodeMCU" combines "node" and "MCU" (micro-controller unit).The term "NodeMCU" strictly speaking refers to the firmware rather than the associated development kits. Both the firmware and prototyping board designs are open source.

The firmware uses the Lua scripting language. The firmware is based on the Lua project and built on the Espressif Non-OS SDK for ESP8266. It uses many open source projects, such as lua-json and SPIFFS. Due to resource constraints, users need to select the modules relevant to their project and build firmware tailored to their needs. Support for the 32-bit ESP32 has also been implemented.

The prototyping hardware typically used is a circuit board functioning as a dual in-line package (DIP) which integrates a USB controller with a smaller surface-mounted board containing the MCU and antenna. The choice of the DIP format allows for easy prototyping on breadboards. The design was initially was based on the ESP-12 module of the ESP8266, which is a Wi-Fi SoC integrated with a Tensilica Xtensa LX106 core, widely used in IoT applications (see related projects).

The Bluetooth module HC-05 is a MASTER/SLAVE module. By default, the factory setting is SLAVE. The Role of the module (Master or Slave) can be configured only by AT COMMANDS. The slave modules cannot initiate a connection to another Bluetooth device but can accept connections. The master module can initiate a connection to other devices. The user can use it simply for a serial port replacement to establish a connection between MCU and GPS, PC to your embedded project, etc. The HC-05 Bluetooth module is the most economical and easiest way to go wireless (via Bluetooth).

This module makes it easy for you to wirelessly extend your serial interface, so you can control any program running on your Laptop with the serial port interface.

Install the Blynk Android App & open it. Sign in to Blynk App with email address & create a project by clicking on “New Project “as “IoT Home Automation”, select board as NodeMCU, connection type as Wi-Fi, select dark or light theme & click on create.

To edit each button's details open it & given the name LED1, LED2, LED3 & LED4. Click on Pin & Select Pin as Virtual along with V1, V2, V3 & V4 for 4 Buttons. Select Mode as SWITCH. Add OFF label as OFF & ON label as ON in all 4 buttons you can select 4 text colors (say Red, Yellow, Green, Blue) for 4 different buttons. Press the back button & click on the triangle button at the top of the screen to make an app in active mode.

Now you can control the electrical appliances connected to the project with Blynk App across the world.

Open the Arduino Sketch in Arduino IDE, install & include the Blynk library. Add the Auth Token received on Blynk Account registered email address, Wi-Fi network SSID & Password, too. Upload the code to the NodeMCU board.

Install the Bluetooth Automation app provided in this GitHub repository. Open your phone’s Bluetooth settings, search for nearby networks. If you’ll get the HC-05 Bluetooth module then pair your phone with it (the default password is 0000 or 1234). Now open the Bluetooth Automation App & press on the blue color Bluetooth Button & select the paired HC-05 module & now you can control the electrical appliances connected to the project with Bluetooth even though the internet speed is slow or not at all.