Ever wanted your whole room to be lit in sync with the music? Or to be able to control it with your voice? Then this might be for you!

Ever wanted your whole room to be lit in sync with the music? Or to be able to control it with your voice? Then this might be for you! 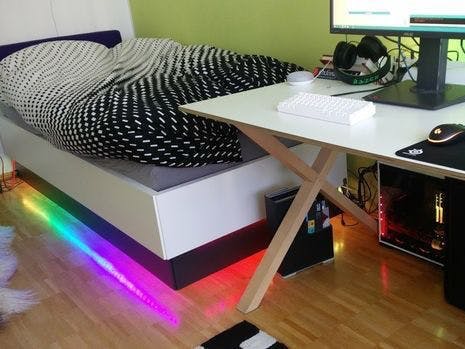 I've been working on this for a couple of months now and I'm constantly adding new functions and features, but since I haven't seen anything quite like this on the Internet yet, I'd like to share it with you guys...

Addressable RGB Strips have been gaining traction as of late. And why shouldn't they? LEDs look fantastic, they're super efficient and since they're RGB you can customize them as much as you want! But actual finished products like Philips HUE are still quite expensive and are lacking many features in my oppinion.

The DIY community has shown time and time again that it's possible to create whole room addressable RGB lighting for under 50$, by using the popular WS2811 strips and an Arduino to control them, but usually you're stuck with button controls and a couple of effects. That's why I tried to create my own solution, that can be controlled over Wifi, as well as cellular if you're not at home, doesn't rely on your PC as a power source and since I love ambilights for your monitor, I also wanted to incorporate that into the project, to sync your whole room to whatever is onscreen when that mode is active.

I won't cover the basics, like installing Arduino IDE or how to get the libraries you need, but if you're interested, simply message me and I'll try to help.

The first thing you should do after you've gotten your LEDs is connecting them to the PSU to check if they work. Those Strips from China that you find on eBay are usually fine, but some might have defective parts, and it would be a shame if they didn't work and you figured it out after you installed them. DON'T PLUG IN THE PSU UNTIL EVERYTHING IS CONNECTED! To test them, you have to connect the 12V pin (or 5V on some Strips) to the +12V connector of your power supply and the GND pin to ground (the - connector, usually black). To control them, we're gonna use the Arduino. Connect the ground of the Arduino to the PSU ground and the DIN (data) pin of the LEDs to D3 on the Arduino. You can choose any other digital pin as well, but you're gonna have to change the code accordingly.

Install the FastLED library to your Arduino IDE and upload the DemoReel100 code, from the FastLED examples.

If you're seeing the LEDs light up, you're good to go.

To install the LEDs I used simple double-sided tape that I cut into short strips.

I'd recommend planning where you wanna install everything beforehand since the LED strips can only pass data in one direction, so they have to be oriented away from your Arduino/NODE MCU. You can always cut the strips to your liking and connect them separately to your Arduino (I'm using 3 separate Strips for my Bed, Table, and PC, but have the Table strip divided into 2 zones, one for the table and one for my Ambilight).

You should probably check everything for shorts before proceeding to the next step, but you can also skip this if you like living dangerously.

Some of you might wonder, why you need both Arduino and NODE MCU for this project...

The NODE MCU is controlling the LEDs and communicating with the App as well as the IFTTT service for google home. This is enough to control all the Effects and colors remotely... But since I wanted this to be able to connect to my Ambilight, I needed a serial connection to my PC to get the On-screen data. That's where the Arduino comes into play. Its only job is to get the On-screen data, store it, pass it on to the NODE MCU board when needed.

Why didn't I simply use the serial connection of the NODE MCU? Well, for some reason every f***ing time I tried, the serial data would get corrupted, and I would receive total gibberish... I guess it has to do with FastLED disabling interrupts, to get the LED timings right, but I'm not quite sure... If anyone has an idea how to fix it, I'd love to hear it.

Skip to here, if you just wanna know what to do

To connect the Arduino to the NODE MCU, we're gonna use the pins D3 and D4 on the Lolin Board and the A4 and A5 pins on the Arduino. Since the ESP8266 (the heart of the NODE MCU board) officially only supports up to 3.3V, you might want to add the bidirectional voltage converter in between. Additionally, you have to connect the grounds of the boards, by using a jumper between two of their GND pins.

Since the ESP8266 uses quite a lot of power on startup, connect a capacitor to its VU (the voltage from the USB port) and ground pin, to prevent random resets.

The Arduino code, to get all the values from your PC:

The code is far from clean, and a lot of effects are still missing, but I had to make a new version since the last one was too unstable... I'll be updating this mess, but it works so...

The Program you need running on your PC is called Prismatik:

To connect, select the COM port of the ARDUINO, not the NODE MCU.

The music modes use the Music detection of Prismatik, not a microphone! For proper function, set the mode in Prismatik to music reactive and the colors to black and full red!

Now that everything is connected and set up, you can go ahead, and download the Blynk app to your phone and create this project: tinyurl.com/y dbbn94x

To add Google Assistant support, you need an IFTTT account and the IP address of the BLYNK server in your region. To find the IP, simply type: ping blynk-cloud.com into the CMD window on your PC.

Create a new IFTTT Applet, add the google assistant command as if, and webhook as then.

In the webhook tab, set the URL to:

The method has to be set to PUT, the content to application.json, the value has to be written in square brackets and quotation marks, e.g.: ["0"] for off and ["1"] for on.

If anyone actually does this project, please let me know... I'd love to hear your feedback/suggestions/thoughts since this is my first tutorial.

Hope you had fun!