Magicbit: An Easy IOT Platform for Everyone (ESP32)

Magicbit: An Easy IOT Platform for Everyone (ESP32) 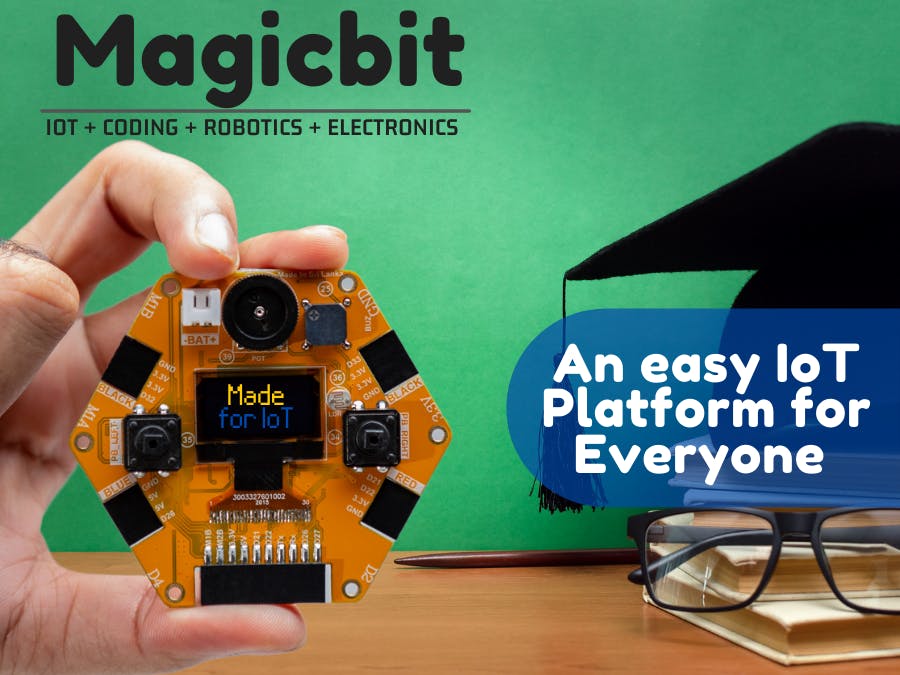 The Magicbit platform is described as a tiny computer or a single integrated circuit, roughly the size of a palm on the hand based on ESP32. It consists of pluggable modules and other features to gather input data, process, and produce certain action-based outputs. The platform is also introduced an innovative environment with hardware, software, mobile app, and other accessories. Magicbit can be programmed using a large number of frameworks and programming languages such as C++, Python, Scratch, Magicblocks, mBlock, Codda, Arduino, Visual Micro, JavaScript, PlatformIO, and.net Nano Framework. The device also supports IoT platforms such as Magicblocks.io, Blynk, Thinger.io, Thingsboard.io, Azure, AWS, and GCP.

The Magicbit project was started in 2019, to provide innovative learning methods for students interested in the fields of Electronics, IoT, and Robotics. Explore more at https://magicbit.cc/

The heart of the Magicbit is ESP32, which is a series of a low-cost, low-power system on a chip microcontroller with integrated Wi-Fi and dual-mode Bluetooth. Hence, any document or resources which support ESP32 can be used for Magicbit as well.

The device is designed to interact with a host of sensors such as motion detectors, fire sensors, light sensors as inputs, and output devices include LEDs, speakers, motors, switches, and buzzers. Magicbit hardware can be programmed using an industry-standard development environment (IDE) that is compatible with PCs, mobile devices, tablets, or web platforms.

Other features of Magicbit include the following:

The front side of the Magicbit board consists of mainly the following components. A potentiometer, buzzer, two pushbuttons, battery connector, external pin connectors, OLED display, and crocodile clip connectors. The potentiometer is a simple knob that provides a variable resistance, that can be read into the Magicbit board as an analog value. OLED (Organic Light-Emitting Diodes) displays various graphics and text on the display and is a flat light emitting technology. Magicbit crocodile clip connectors can be used to connect an electrical cable to a battery or some other component.

The backside of the board consists of basically, motor drivers, module connectors, four LEDs, ESP32 with Bluetooth and WiFi, a reset button, a battery charging circuit, and a USB connector. The four LEDs in the Magicbit are colored red, yellow, green & blue. A single-cell rechargeable li-ion battery (3.7V) can be plugged into a battery connector to power the Magicbit. The battery can be recharged by providing USB power to the Magicbit. There are four module connectors on the edge connector of the Magicbit, referred to as ports. Using the ports, various accessories can be connected to the Magicbit board and program to work with it. The matching pin map provides more insights into this. The micro-USB port on the back of the Magicbit connects the board to a mobile phone charger or computer to draw the power required for the board to function. Programming and data transferring also can be carried out using the same port.

Magicbit supports a wide range of coding frameworks. And also it supports almost all popular cloud platforms thanks to powerful ESP32 core. Hence you can always code with your favorite platform.

• Magicblocks.io – A NodeRed based platform for designing IoT solutions

Arduino & MicroPython are recommended for users with pre-programming experience. Magicbit provides an extension for MBlock3 for kids and beginners without pre-programming knowledge.

Magicbit sensor modules are easily pluggable (plug and play) and fitting set of sensors to Magicbit, including:

Different sensors can be plugged into the Magicbit platform simply as plug and play modules which avoid the hassle of jumper wires and breadboards in projects.

This is a line following robot developed to learn the basic concepts of Robotics. Magicbot detects and avoids obstacles and can be controlled wirelessly with WiFi and Bluetooth.

Explore lots of projects made with Magicbit here.

Magicbit is kids friendly. The platform was developed to reduce the barriers to learning mainly for the students and to eliminate the problems that occur when innovating things. The incorporation of Magicbit was in August 2019 and in October the same year the first prototype of Magicbit was developed. Then in February 2020, Magicbit and Cloud IoT software magicblocks.io were integrated. The initial launch of Magicbit in Sri Lanka happened in September 2020.

With its hardware, software, and mobile app integrated environment, Magicbit provides an easy to learn, feature-rich and cost-effective solution to all innovators, learners, and students. Magicbit has been recognized with over 8 national-level awards in Sri Lanka and has showcased in a number of international conferences as well.

The project is ready to reach its next level and we would like to request you to provide us your support by helping to improve this innovation and collaborate to bring this project to life while promoting innovation across the world. Your ideas and suggestions are also most welcome which will further strengthen our effort.