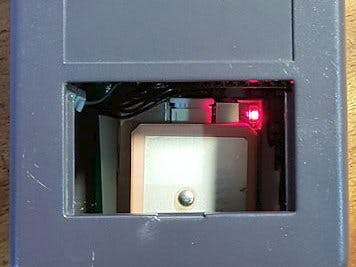 I had a spare GPS unit lying in my box of old components, so I decided to put it to good use by installing it into my car together with a Particle Photon. This allows me to track its whereabouts when someone borrows it. Of course this project could be modified to track almost anything.

Although I used a Particle Photon which only connects via wifi instead of 3G, I used it for 2 reasons:

The only item I did purchase was a 2000mAh Li ion battery and a Li ion battery charger from Adafruit. This allows me to not only keep it plugged into the cars power socket permanently, but also to unplug it and have a portable unit if I need to track something else temporarily.

The following diagram shows the components connected together in the circuit. I started by connecting the GPS module to the hardware serial port on the Photon via pins:

The online Particle code editor was used to write the code. The following snippet shows the declarations needed:

The setup routine is needed to initialize both the hardware serial port of the Photon and the connection to the Blynk server:

Finally, code was written to read in the string from the GPS module and send it to the Blynk app as well as the Particle cloud at certain intervals. Location data was updated every 2 seconds whereas the same location was written to the Particle cloud every 1 minute as a string. This string can be pasted directly into Google maps for a location view.

The final task was to create a new project in the Blynk app on my Android phone. I created a new project, named it "GPS-Track" and selected the Particle Photon (WiFi) as the device:

The main component (widget) on the Blynk interface was the map widget. This was created with the connection to virtual pin V0:

The other labels were added and setup as follows:

The label V5 was used for status messages.

The final system allows easy tracking with an accuracy of around 20m indoors and 12m outside. I'm sure that this could be improved by using a newer more sensitive GPS receiver module.

0 projects • 11 followers
Educator by day, tinkerer by night.
ContactContact
Thanks to Mikal Hart.