This is a robot who can see, listen, talk, and move freely to help us do many activities, much like a friend.

This is a robot who can see, listen, talk, and move freely to help us do many activities, much like a friend. 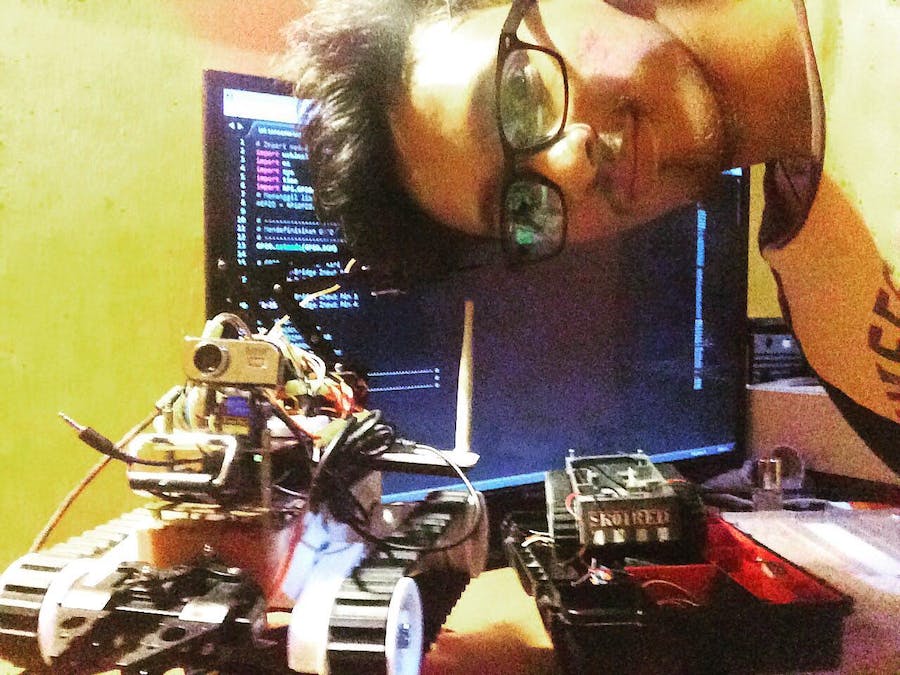 This is HAR - Human Assistant Robot. HAR was created and designed for humans, to be able to do any kind of activity. I started from the simplest activities, such as turning on home appliances, e.g., fans, televisions, lights, and washing machines. Particularly, HAR is also able to help people with disabilities to do their daily activities. In another field, HAR has functions that may help geologists to conduct surveys, in terms of research of dangerous places. Another good use for HAR, as the Human Assistant Robot, is that could function as equipment used by the SAR officers to search and rescue victims of earthquakes. Also it could be controlled easily by giving instruction through voice command and visual user interface found on a personal device's web browser such as mobile phone or even a computer. And for 2018 development, i want to use WALABOT to complete many feature in my robot!

"If you survive until tomorrow, it could mean that you are more likely to be immortal or you are closer to death" - Nassim Taleb.

I choose to make people immortal, by saving their life in my perspective. We all know we have a lot of troubles in this world, like disasters, sickness and everything else.

In my country, Indonesia, there are a lot of disasters every year: extreme floods, earthquakes, etc. And the government have a limit to what they can handle. It's hard to find victims when the earthquakes hit. SAR (Search and Rescue) officers try so hard to find them, sometimes they need six hours to find just one victim. That's the first problem.

Indonesia is a tropical country who has more than 30 volcanoes, a thousand islands, hundreds of cave and many historical buildings. There are a lot of geologists or scientists interested in doing research here. And sometimes they have a problem: the problem is they can't go into a small cave to do their research because it's too dangerous. And I will not let it stop them from getting more information there. That's the second problem.

My uncle has a sickness, and he can't do anything except sleep on his bed and call his wife to do something for him like to turn on the fan, or even for turning off the TV. I want to help him so much. That's third. And three is more than enough.

So I gave it a name - HAR, or Human Assistant Robot. Powered by Raspberry Pi, HAR can do a lot of things for us.

I put in a voice computing platform to solve my uncle's problem. So he just need to say the magic words, such as "turn on the TV please" and the TV will be turning on. Besides that, HAR can tell him a joke, tell the time or the weather.

I should make HAR move! Yeah!

I gave HAR a tank chassis and two grippers. The main gripper, the biggest one, is a static gripper; it can handle till 11kg of weight. And the second gripper is dynamic, so it can move to the right and left side, up and down, as we want it to move. So we can use HAR's arm to move something that we want.

How we can control it?

I gave HAR an IOT framework. I started to create the simple script using Python and HTML. And it works. So now, HAR can control other electronic devices with voice command. And it can be controlled using a visual interface system.

I will keep trying to add a lot of enhancements to my robot, and I hope this robot can help us to do a lot of activities, such as helping an auto mechanic with repairs, and many more.

I want to make HAR bigger and give it a new big arm chassis, so it can work perfectly if I used it to help a victim in an earthquake.

For the next upgrade, I will give HAR some ultrasonic sensors. In case the operator uses it in a dangerous or dark area, HAR will be able to send the operator information about the objects around him. And in the last of September, I've succeeded installed Google Assistant SDK to take over the voice command replacing Jasper. I've succeeded in connecting my ESP32s to my Pi using different methods like MQTT and IFTT + BLYNK. For the hardware, when I first started this project I was not using any servo controller, so the servos connected directly to my Pi. But in time, I've bought PCA9685 to control the servo using I2C. This is a video showing the servo control using web interface.

So I can control my robot with voice command and also via web interface.

And i have finished my OpenCV configuration, here's the photo that i've taken when trying to detect an object.

Next step? I want to use HOLOGRAM NOVA and ARDUINO MKR1200 so I can track my robot, and also can be controlled from everywhere (no WiFi needed).

I will use ARDUINO MKR1200 to be a MQTT client who will handle so much task and combine them with ESP32.

You can Download my Diagram in code section below.

After all, I have come to a conclusion: if this prototype can work well to solve many problems in my country, how about the world? I believe that it can be used, too. And I will keep believing. 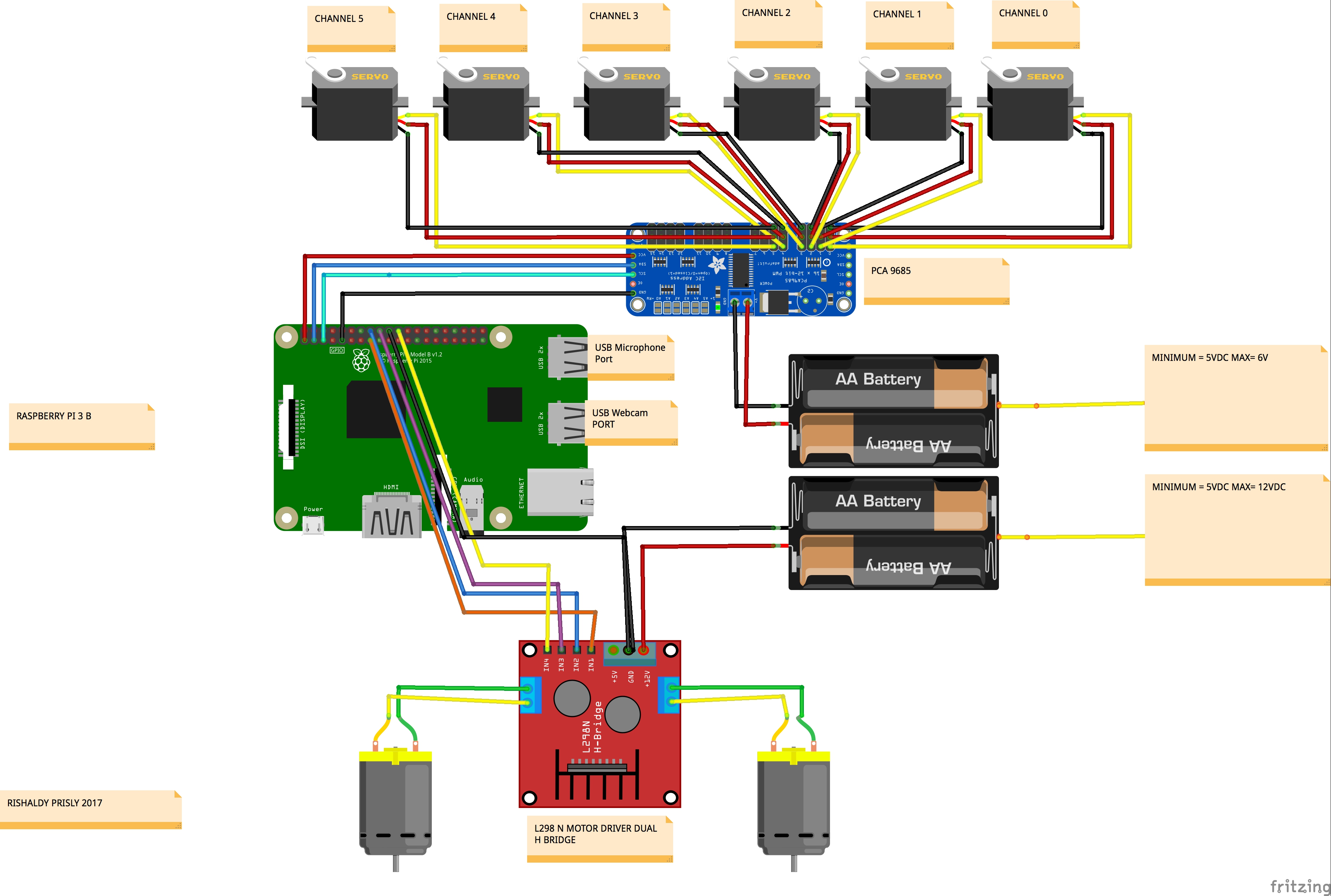 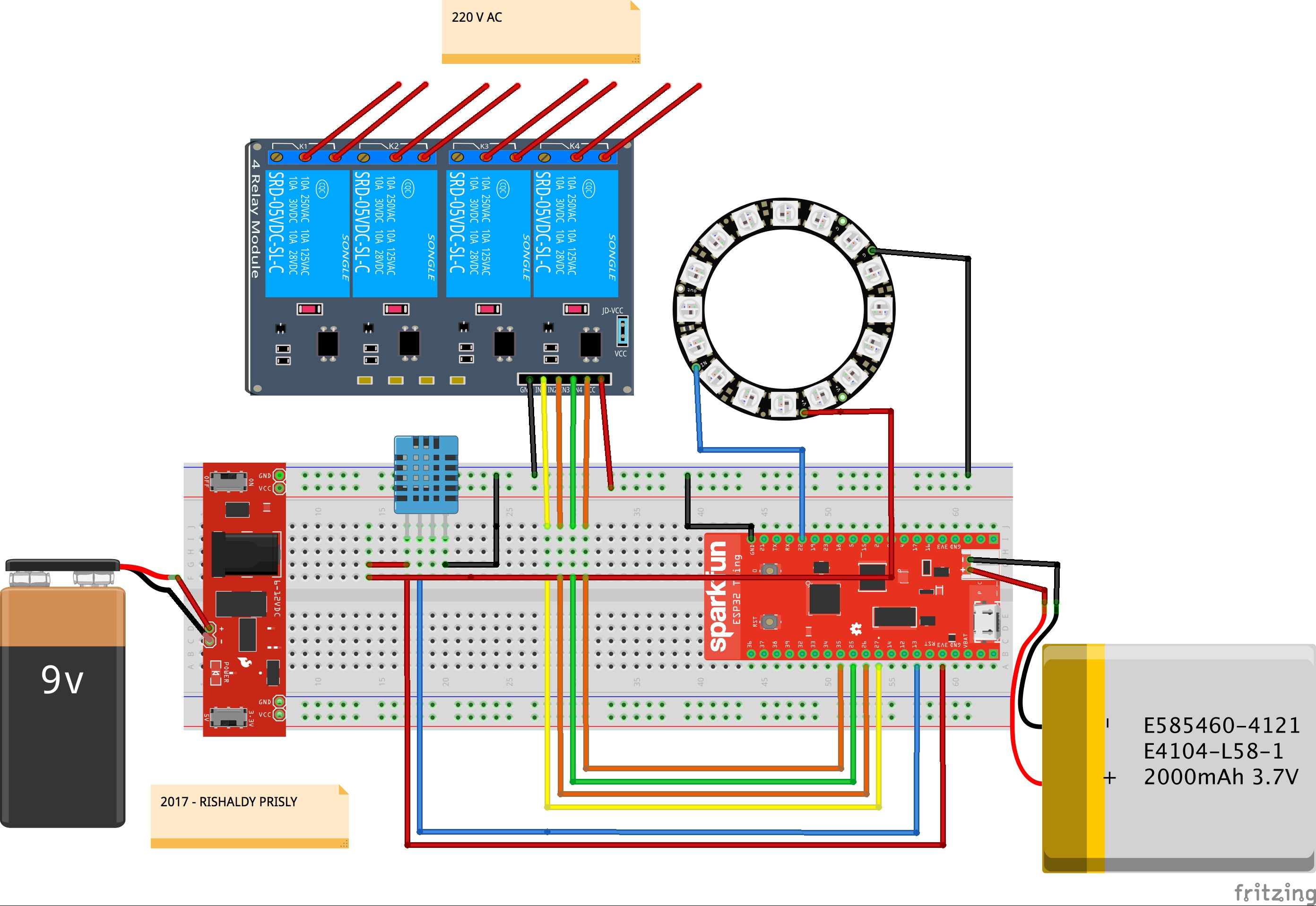