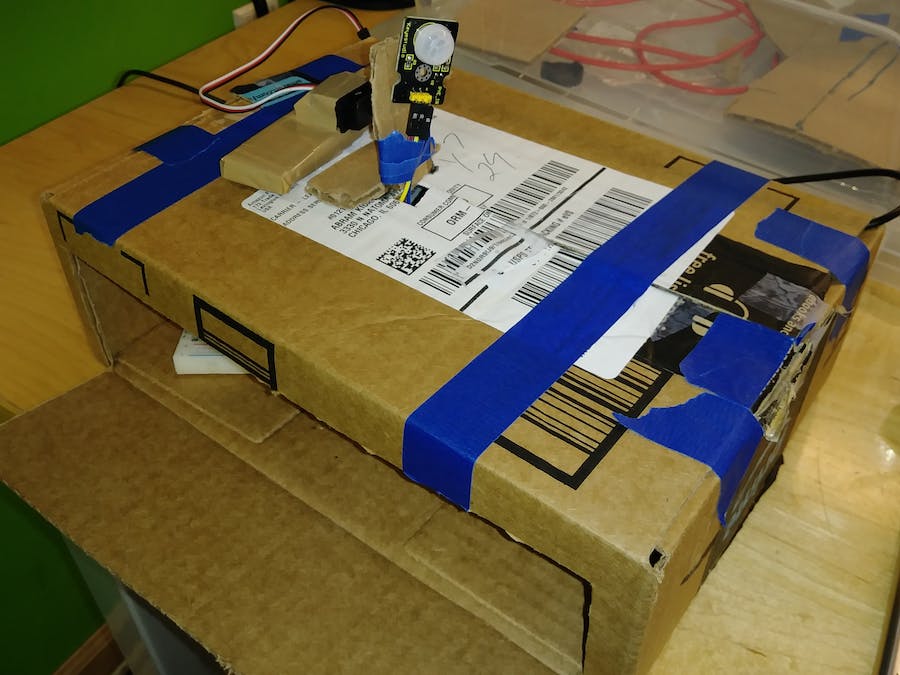 The reason why I did this project was because I wanted to control my light remotely, to ease turning off the light before going to bed.

Basically this project consists of two main components: the motion sensor, and the servo.

As you can see in the first image, the servo needs to be behind the motion sensor, because when the servo triggers, the PIR sensor will read that motion and output voltage.

The motion sensor has a Particle Photon wired to a 9g Micro Servo, which triggers when the PIR sensor outputs high voltage.

As you can see, the servo is taped to a cardboard pad; created by stacking multiple layers of corrugated cardboard on top of each other. This horizontally elevates the servo, allowing it to function better with the switch.

The enclosure is a basic cardboard box.

As you can see, the servo wires run through the Amazon box's convenient holes in the corners of the box in which the power cord(micro-USB) utilizes as well. Also, the motion sensor had to have a slit cut in it because the three jumper wires were not thin enough to fit between the two flaps.

Another feature was the door on the side that opens up. This reveals the wiring of the breadboard, so any parts may be easily replaced and modified in the future.

Thanks to Blynk, IoT integration was simple and easy. All I did was hook up a virtual button to my code, which took me less than 30 minutes.

There were a few problems encountered when doing this project, and most of them came initially, when I tried using a IR remote to trigger an IR receiver. The biggest and most frustrating was trying to increase the range of the IR pair. I tried many things to combat this problem. I tried using a TV remote, which is known for triggering a sensor over long distances. That didn't work. Next, i tried surrounding the receiver in aluminum foil, so the IR beam would refract back into the receiver.

After that I tried tweaking my code, getting rid of delays, and removing Blynk altogether, but noting seemed to work. Finally, I decided to replace the IR pair with a PIR motion sensor, which made life a lot easier.