When rat enters the trap, there's no turning back

When rat enters the trap, there's no turning back 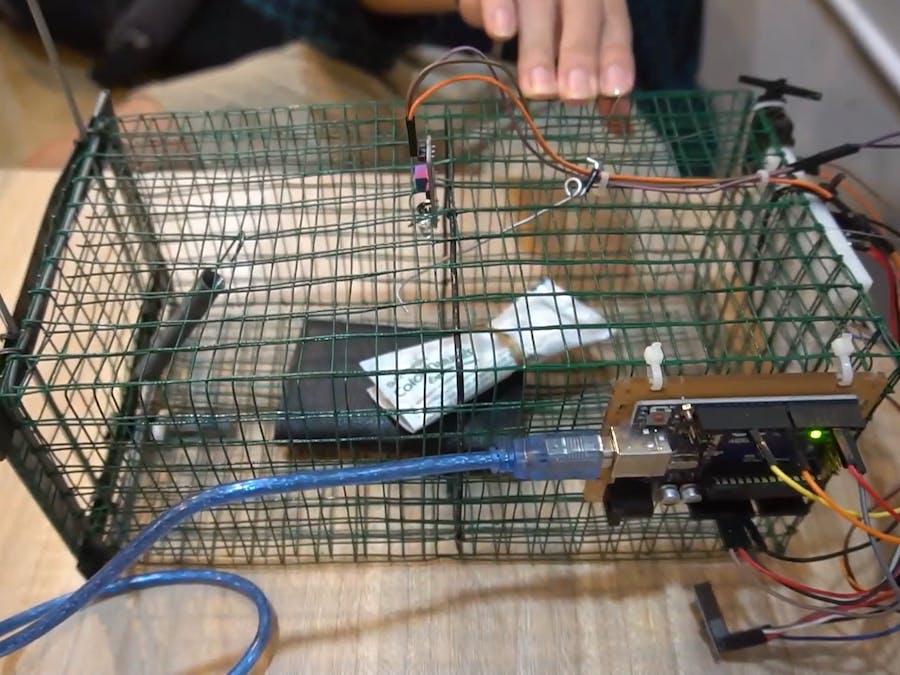 First of all thank you for checking out our project! Here a story of how we made it

In Indonesia where we live, house rats infestation is a common problem especially in old houses. One of our member usually set up a simple metal rat trap using food bait in one corner of his house where rats usually come and go by. The problem is that sometimes the rat only enter the cage without ever touching the food maybe because they wasn't interested in the food. And the trap works by closing the door when something touch and wiggle the food, the rat can immediately get out without a scratch when its doesn't want the food

And so, we decided to combine the trap with sensor to make sure that when the rat comes, the door will be closed immediately. Here's how we do it

First of all the hardware required for this project are:

One of the essential part in this project is Blynk. By using Blynk, we can make the prototype of this project without creating any server and mobile app. We simply use their API to connect the Arduino to the app

Next is the sensor choice, for detecting the rats we first try to use PIR Motion Sensor but for some reason our sensor came from mail not working at all and at that time we only have 1 other sensor which is IR Obstacle sensor. And so, we decided to use that as an alternative.

So what is an IR Obstacle Sensor? The sensor has 2 main part which is an IR Emitter and also IR Receiver. It the IR Receiver detect the reflection of the IR Light from some object, it will report the value as 0 if not then the value is 1. So by using this sensor, when the rats came its body will reflect the IR light and will trigger the door to close

Now after narrowing down on the sensor, we design how the hardware part will works. The schematic and the code of the project will be provided below but here's an explanation of how it's works.

First the IR Sensor has 3 pins which is 5V power, ground and also data. As explained before, when it detect the reflection of the IR it will give value of 0 and after that we will trigger the next chain.

As for the communication, we used an ESP-01. Although it can be used independently to control a sensor, in this case we will only be using it as a Wi-Fi module to communicate with Blynk server. It has 8 pins which is 3.3V power, TX for transmitting data, RX for receiving data, ground, enable, reset, and 2 GPIO pin.

The problem we encounter is that because the Arduino digital pin sends out signal in 5V power we need to step down it to 3.3V so that it can be receive by ESP-01 which only support 3.3V power. This is where the resistor came in to step down the power. And this is highly recommended to make sure your ESP won't be getting hot and eventually fried.

As mentioned before, we create this project with help of piece of software called Blynk which makes prototyping so much easier. In the blynk app we just simply create new project and it will give us the API code needed to be pasted into the arduino code. After that we can simply create the layout that we wanted

Here is the layout that we ended up with:

As you can see the layout contains 4 part which are sensor readout, servo angle readout, virtual LCD, and also a reset button. The sensor and servo angle readout are self explanatory. The LCD will output either "Ready" or "Not Ready" depending on the status of the trap. If the servo aren't at 0 degree position it will give out "Not Ready" and when the servo is at 90 degrees position it will give out "Ready"

So basically that is all about the project and it prove quite effective in detecting an object that came into the trap. But, some tweak still need to be made because sometimes bugs can come near the sensor and triggering it to close the door. Thank you for checking out! 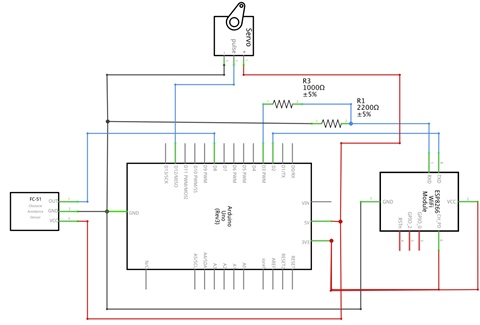