Tired of getting off your couch to unlock your door for your roommate? Forget to lock your door on your way to class? Say no more…

Tired of getting off your couch to unlock your door for your roommate? Forget to lock your door on your way to class? Say no more…

We are all lazy.

There have been countless times where I have rushed out the door in a hurry to a class that I’m 30 minutes late for — due to oversleeping — and have forgotten to lock the door. I could also account for the times that I have been under a mountain of snacks while on the couch and someone comes to the door, resulting in me having to tumble off the couch, walk to the door, and unlock the door.

The solution is a photon connected to a stepper motor that stays in front of the door lock.

Before construction, specific parts need to be made for the stepper motor to couple onto the lock. Two objects were designed as a modification to our door lock.

Object one is an attachment that goes directly onto the shaft of the stepper motor. This part was designed to be a tight fit, requiring no locks or set screws as you would see in a standard coupler. The opposing end had a generic shape that goes around the area of the lock just enough so that it rotates relative to the stepper motor.

Object 2 is the body (housing) of the system. This part goes over the door lock and grounds the stepper motor. Measurements were taken to design the part to fit around our lock frame which was approximately 2.10 inches.

Simplify 3D is the slicer software used to print this part, given a .stl file.

Simplicity was the goal of our project which meant that our application had to be intuitive and easy to use. Using Blynk, we were able to remotely control the stepper motor by toggling through a single button. Only two functions were needed in this design; lock and unlock.

When the button is set to "UNLOCKED", digital pin 3 is set to LOW which verifies that the door is unlocked. If the door is in a locked state prior to activating the button, the program will run through a series of IF statements until the lock has rotated a certain number of times in the counter-clockwise direction.

When the button is set to "LOCKED", digital pin 3 is set to HIGH which verifies that the door is locked. If the door is in a locked state prior to activating the button, the program will run through a series of IF statements until the lock has rotated a certain number of times in the clockwise direction.

The circuit board for the stepper motor schematic is shown below. The following image after is the device attached to our front door.

The particle photons (1, 2, and 3) communicate with one another once the locking mechanism is triggered to rotate by the Blynk application on a user’s phone. A list of the line of communication and responses:

The third particle simultaneously and continuously publishes data to ThingSpeak.com. This graph publishes locked and unlocked data versus time. A 1 is published when the door is locked and the D7 LED is on; a 0 is published when the door is unlocked and the D7 LED is off. The communication strings detailed above show how & why the LED is turned on. The time stamps include the data and military time allowing the viewer to be able to see what times of the day their door was locked or unlocked.

Sample graphing of the lock's data

The graph sample shows that the door remained unlocked from about 21:16 to about 21:21. Then the door was briefly locked before being unlocked for a minute. It was again locked and unlocked.
A continuous, updating version of this graph can be found at this website. 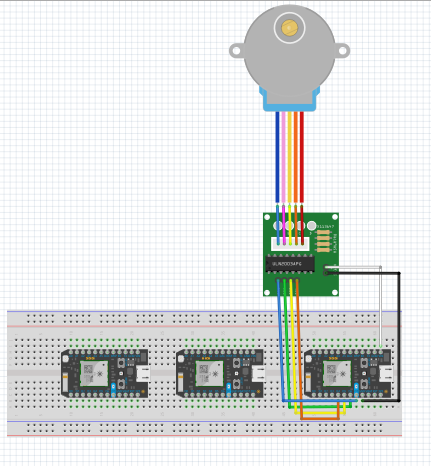